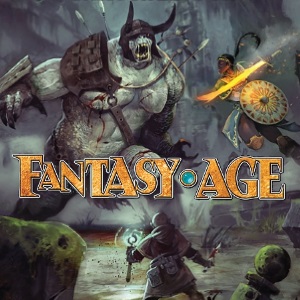 If you’re a regular reader, then you should know that I’m a fan of Green Ronin’s AGE system that was introduced in the Dragon Age RPG. A while ago, Green Ronin announced that they would be releasing a version of the AGE system that wasn’t tied to the Dragon Age IP. I’ve never been particularly drawn to the Dragon Age setting and haven’t played any of the computer games, so I’ve been excited to see what a more generic version of the AGE system would look like. The Fantasy AGE Basic Rulebook was released last week in pdf (physical books are available to preorder), and I quickly purchased a copy and started reading.

The Fantasy AGE Basic Rulebook is an 144 page book that is full color. It is a standalone book that doesn’t require any familiarity with the existing Dragon Age RPG. The book contains information for both players and game masters, and is divided into a Player’s Guide (pages 7-80) and a Game Master’s Guide (pages 81-139). The Player’s Guide features chapters on character creation, basic rules, character options, equipment, magic, and stunts. The Game Master’s Guide features chapters on what it means to be a game master, additional rules, adversaries, rewards, campaign settings, and a sample intro adventure.

Fantasy AGE is set up to be a base product for setting and adventure books to build on. It has been used for Geek & Sundry’s Titansgrave series and a Titansgrave book is expected to get released later this summer at Gen Con. In addition, Green Ronin is using Fantasy AGE as the basis for their new edition of Blue Rose which is currently nearing the end of its kickstarter campaign. As a big fan of the AGE system, I hope more products are in the works too.

In many ways the AGE system as presented in both Dragon Age and Fantasy AGE is a relatively light-weight fantasy RPG. Actions are resolved by rolling 3d6, adding an ability bonus, and comparing against a target number. It features three character classes: Mages, Rogues, and Warriors. Characters advance by gaining levels, with 20 being the highest level, but the power curve is much shallower than seen in Dungeons & Dragons. In addition to gaining class powers as they level, characters increase their ability scores, gain focuses that give a +2 or +3 bonus on related rolls, and gain talents that grant special abilities.

The most interesting feature of the AGE system is the stunt mechanics. On any successful ability check, if at least two of the dice rolled show the same number then the roll generates stunt points. These stunt points can then be spent to generate special effects on the action. For example, on an attack you can spend stunt points to knock the target prone or increase the damage. Because rolling doubles on 3d6 happens pretty frequently, stunts come up a lot during a game compared to critical hits in D&D, and the different options for spending them make for more interesting critical hits than just boosting the damage.

While the core of the AGE system is shared between Fantasy AGE and Dragon Age, Fantasy AGE makes several big changes when compared to Dragon Age.

Fantasy AGE takes the concept of backgrounds in Dragon Age and breaks them into both race and background. The races are similar mechanically to Dragon Age’s backgrounds in that they give a set of benefits including two rolls on a random table. Fantasy AGE’s backgrounds represent social class and professional training and grant characters a single focus. The basic rulebook includes 6 common fantasy races (dwarf, elf, gnome, halfling, human, and orc) as well as rules for half-races. This split works well for making a more generic game, but the tradeoff is that it loses some of the flavor that setting-integrated backgrounds offered.

The magic system in Fantasy AGE is different from Dragon Age’s system. Spellcasting rules are largely the same, but spells are now learned by taking spell talents rather than being picked from a list. Each talent represents an arcana of magic such as Fire, Healing, or Shadow, and includes 4 spells (2 novice, 1 journeyman, 1 master). There are a total of 12 arcanas included in the book.

Fantasy AGE uses the same three classes as Dragon Age, but there are some differences in the details of the classes. One change I was happy to see is that the Rogue class now has better support for archery-focused characters which was a common complaint with the Dragon Age version of the class. The Mage class was updated due to the new magic system. Each class also has a slightly different power progression in order to gain specializations at levels 4 and 12 rather than 6 and 14 like in Dragon Age.

On the topic of specializations, Fantasy AGE includes a total of 12 specializations that characters can take with 4 for each class. Mages can become Arcane Scholars, Elementalists, Miracle Workers, and Sword Mages. Rogues can become Assassins, Duelists, Sharpshooters, and Swashbucklers. Warriors can become Berserkers, Guardians, Knights, and Mage Hunters.

Equipment is largely the same as in the Dragon Age RPG, but Fantasy AGE adds black powder weapons to the mix. These weapons form a new weapon group that contains the arquebus, blunderbuss, and pistol. They have a higher damage output than bows, but suffer from shorter ranges.

The Fantasy AGE basic rulebook does not cover everything that exists in the Dragon Age RPG. This shouldn’t be a surprise as its a 144 page book compared to the 440 page Dragon Age RPG Core Rulebook. Notable chunks from the earlier game that aren’t included in the Fantasy AGE book are rules for mass combat, trap-making, advanced spell stunts, and organizations.

What could be better?

The biggest draw back to Fantasy AGE is its limited page count. There’s only so much content that can be fit into 144 pages. In addition to the material from Dragon Age that didn’t make it into the book, I think the section that felt most constrained was the chapter on adversaries. It contains only 14 different opponents and as a result feels pretty limited. I think some players will also be eager to see more choices for specializations and arcanas. My hope is that additional Fantasy AGE products will help fill out the gaps over the next couple years.

Overall, the Fantasy AGE Basic Rulebook is a great version of the AGE system for those who want to use it in their own worlds rather than the Dragon Age setting. If you’re looking for a fast & fun fantasy RPG then I recommend picking up a copy.

One reply on “Fantasy AGE Arrives!”

Spell talents… Huh. Just how I handled the force when I wrote my star wars conversion.