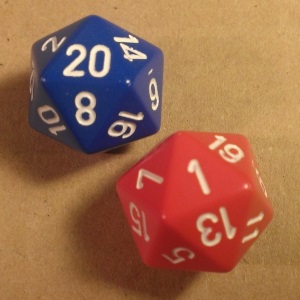 Advantage and disadvantage also enable other effects to easily use them as triggers. For example, a rogue’s sneak attack class feature is usable whenever the rogue has advantage on an attack. Those triggers incentivize effects that give either advantage or disadvantage much more than effects that would give simple modifiers. For example, even if a disadvantage effect leaves a rogue with a good chance of hitting, the benefit of negating sneak attack means that an effect isn’t wasted. I hope there are more triggers like this when the core rule books are released over the next few months.

Because you roll two dice and then take one of them, the effect is that you have a higher probability of rolling at one end of the 1-20 range and a lower probability of rolling at the other. This is very different from the effect that a modifier has even if the average rolls are about the same. For example, on an attack with advantage you’re average roll is only about 3 higher than a normal attack, but you’re almost twice as likely to roll a 20 and get a critical hit (9.75% rather than the normal 5%). With disadvantage, your chance of getting a critical hit drops to a tiny 0.25%!

What do you think of the advantage and disadvantage mechanics in the latest edition of Dungeons & Dragons?

One reply on “Advantage & Disadvantage”

In play, I feel it works really well, especially with the inspiration mechanic. It simplifies a large chunk of the +/- that I disliked in 3e-4e.

Then again, I’ll admit to not being very good at groking the math side of it. It seems to work, so I assume it does, hahah.