The Dragon Age RPG includes the stats for the majority of standard quasi-European fantasy weapons, but I’m looking at expanding the list a bit to include weapons from both African and East Asian cultures. 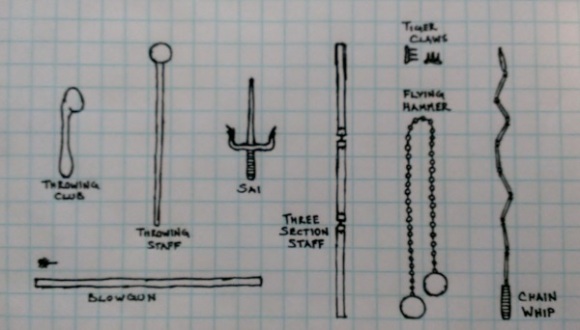 Each weapon belongs to a weapon group that is a broad set of weapons such as Axes or Heavy Blades. Characters who are not trained in a weapon group take a -2 penalty on attack rolls, inflict half damage, and also cut range in half for ranged weapons. In addition, a weapon’s group determines whether Strength or Dexterity is used for attack rolls with the weapon.

I’m going to add a couple new weapon groups to cover some of the more exotic weapons, but for the most part I think the existing groups will cover most weapons. Because I’m doing away with classes, which are the primary means for characters to gain weapon groups, I’m planning to get rid of the penalty for using a weapon without training. I also think that I will change some weapon groups, such as Brawling, to allow using either Dexterity or Strength for their attack rolls. Finally, the Dueling group introduced in Set 2 seems like it could easily just get folded into the Light Blades group other than the spiked buckler that could go to Brawling.

Each weapon deals a different amount of damage. The damage values for existing weapons range from 1d3 for an unarmed strike to 3d6 for a two-handed sword.

An important thing to keep in mind with damage values for weapons is that armor works as damage reduction in the AGE system. A character wearing armor will reduce damage by anywhere from 3 (light leather) to 10 (heavy plate). That tends to mean that high damage weapons can be critical for being able to harm opponents rather than being stuck with 0-damage hits.

Because I’m planning to get rid of most ability score advancement, I think that I’ll have to either reduce the minimum Strength values or get rid of them altogether. The first thing I’ll probably test is reducing minimum strength values by 1 across the board to make it easier for starting characters to be able to qualify to use heavy weapons.

Ranged weapons include a few additional statistics. Each ranged weapon has a short range and a long range. Attacks at up to short range are made normally. Attacks out to long range are still possible, but they take a -2 penalty on the attack roll. In addition to range values, ranged weapons also have a reload time. Most weapons take a minor action to reload, or draw a new one in the case of thrown weapons, but crossbows instead take a major action.

Outside of the main weapon stats, a few weapons have additional special rules. Some weapons require 2 hands to wield. A Spiked Buckler gives a +1 bonus to Defense against melee attacks. Lances can only be used effectively from horseback and get demoted to improvised weapons otherwise.

I will likely increase the number of special rules in order to provide a bit more differentiation between weapons. One thing that I’d like to try is adding tags to weapons that talents and stunts can then use as triggers. For example, a chain or whip could have an “entangling” tag and then the disarm and trip stunts could include a reduced cost when using an entangling weapon. I hope that using tags will allow me to avoid having many references to specific weapons in other mechanics so that the weapon list is easier to expand as needed.

My current list of weapons to add consists of the following: blowgun, chain whip, flying hammer, sai, three-section staff, throwing club, throwing staff, tiger claw, and whip. Are there any other weapons that you don’t think are covered by the existing Dragon Age RPG weapons and these new ones?

All three of the new weapon groups (Blowguns, Chains, and Whips) will use Dexterity for their attack rolls.

One reply on “Hacking AGE – Weapons”