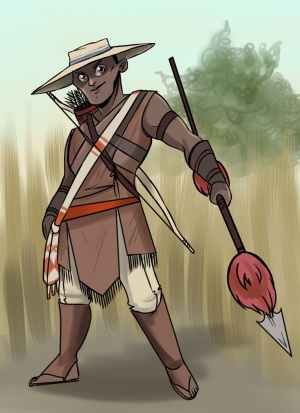 Over the past couple weeks, I’ve been messing around with some ideas for hacking the AGE system used by the Dragon Age RPG. The system has a lot of things that I like, but I don’t like some of its mechanics. Stunts are my favorite part of the system because they provide a good mechanic for interesting critical hits as well as opening up a bunch of cool design space. I also like the system’s mechanics for armor as damage reduction, mana point based spellcasting, and talents that have multiple ranks. That said, I’ve never really been a fan of how character advancement works in Dragon Age since I don’t really like the idea of increasing attributes or the rate of health and mana point gain compared to damage outputs and spell costs.

Some of the initial ideas that I jotted down when thinking about changes to make were:

From that initial brainstorming, I started diving deeper on a few of the ideas.

The AGE system as implemented in Dragon Age uses 8 character abilities as its core stats: Communication, Constitution, Cunning, Dexterity, Magic, Perception, Strength, and Willpower. I originally thought about using a different list, but have ended up deciding to keep the same set as Dragon Age uses. The one change I will probably make is renaming Magic to Spirit to better match the setting that I have in mind.

One of the biggest changes that I’m planning is to completely rework how character advancement works in the game. In Dragon Age, characters gain a few shared benefits each level plus new powers granted by their character class. The core benefits are gaining 1d6+Constitution health points, increasing an ability score by 1, and gaining a focus (a specialization that gives +2 to related ability rolls). The class-provided powers vary between the 3 classes but in general are a talent every odd level and a class-specific power every even level. The mage class also grants 1d6+Magic mana points each level.

The first change I’ve made to character advancement is that each level will now give a lot less. Characters will not get ability score increases, health points, or mana points each level up. Instead, the benefit will be limited to a talent and skill points (see below). Those changes will make the power curve as characters gain levels a lot shallower which is something I generally prefer in games.

In addition to character levels, I’m also thinking about having a second axis of character advancement that is triggered on character milestones rather than experience points. This axis would have five tiers: starting character, hero, champion, legend, and myth. Gaining these tiers would give characters boosts to ability scores and more health/mana points as well as unlocking more powerful abilities. One thing that I’m thinking of is that gaining ranks in talents would only be possible for characters of the appropriate tier. For instance, only a legendary character could take the 4th rank in the Archery Style talent.

When I decided to move away from core ability increases as part of character advancement, I also decided that I’d have to change how the mechanics for focuses worked. Instead of just being able to take a focus once for a +2 bonus on certain ability rolls, I’ve decided to adopt a skill system that allows for characters with scores from an untrained +0 up to much higher bonuses as they gain experience. In some ways increasing a skill’s bonus takes the place of increasing ability scores during character advancement, but they have a lot less scope. I’m also thinking about having maximum skill bonuses based on a character’s tier.

Another change that I’m thinking about for skills is that I’m not sure that I want them tightly coupled to certain ability scores. In Dragon Age, each focus is linked to a specific ability and is always used on a roll of that ability rather than being flexible. For instance, Running is linked to Constitution in Dragon Age, but I could see using it as a modifier to Strength or even Agility for a sprint and then used with Constitution for long-distance running.

In addition, I will be tweaking the list of focuses to create my list of skill options.

When I mentioned changes to advancement, you might have noticed that I simply said characters would get a talent every level rather than referring to class benefits. That’s because I’m planning to get rid of classes and instead allow open-ended advancement. The class powers will be converted into new talents, and each level a character will be able to take a rank in any talent they want.

Because classes also determine starting health and mana points, I’ve introduced the idea of choosing a character focus (yeah, I overloaded the term after replacing Dragon Age’s focuses with skills). At creation, each character can choose to have either a physical focus, a spiritual focus, or be a generalist. Characters with a physical focus start with more health points and fewer mana points, characters with a spiritual focus are the opposite, and generalists sit between the two.

I really like the AGE system’s stunt mechanics. If you’re not familiar with the system, the basics are that on your 3d6 rolls if two of the dice show the same number then you get a number of stunt points to spend on boosts to the action. The stunts effectively replace critical hits with something that happens more often (you get doubles on 3d6 about 44% of rolls) and has a more varied effect. One problem that I’ve noticed with stunts though is that they can cause a break in play when a player gets stunt points and then has to look over the long list of options to decide which stunt(s) to add to the action because every character has access to all of the stunts in the game.

Both as a potential solution to that analysis paralysis and to open up some new design space, I’ve decided to have characters need to learn stunts rather than giving everyone access to the whole list. All characters start with 2 stunts provided by their choice of focus and they can learn additional stunts by gaining ranks in talents. In addition, some special actions incorporate built-in stunts. For instance, the Healing Touch action granted by the Healing Light talent allows spending stunt points to increase the amount of healing.

In Dragon Age, backgrounds are presented as a set of fixed benefits plus a table of random benefits that a character gets to roll on twice. For example, all Surface Dwarves add 1 to their Constitution and gain their choice of the Stamina or Bargaining focuses, but then they may get any 2 of 8 other benefits, such as +1 Strength or the Axes focus, based on their rolls.

While I’ve been pretty happy with backgrounds as-presented in Dragon Age, I ended up stumbling on a presentation that I like even more while brainstorming. For my hacked version, I’m planning to present backgrounds as a series of 3-4 questions about the character that then lead to choices of either abilities or skills to increase.

As an example, here’s one of the backgrounds that I’ve drafted in the new format:

You were one of the thousands of loyal soldiers of the Sun Empire that were sent to the Jade Coast to bring the faith of the sun to its people. For three years, your journeyed across the wastelands of the north to reach the jungles of the Jade Coast. Now for the past seven years you have lived and fought in a foreign land as the sun priests work to bring the faith to its people.

Survived the Long Journey: The long journey from the Sun Empire to the Jade Coast was perilous and only the strong survived. Did you survive thanks to your physical endurance or through strength of will? Increase either your Constitution or Willpower by 1 point.

Strong of Body and Soul: Only those who stood out amongst their peers were chosen to join the crusade. Were you chosen due to your physical or spiritual strength? Increase either your Strength or Spirit by 1 point.

Trained Soldier: The crusaders are well-trained with their weapons. With which weapons did you train? You may choose one of the following skills at +2 or two of them at +1: Bows, Light Blades, or Spears.

Needed to Keep Busy: During the long journey of the crusade, you needed to find things to do while on ships or making camp. What did you do to pass the time during the journey? You may choose one of the following skills at +2 or two of them at +1: Animal Handling, Gambling, Drinking, Performance, Religious Lore (Sun Faith), or Brawling.

Because I’m changing a lot of the system’s mechanics, I’m going to need to do a lot of conversion work on existing parts of the game. A minor example is that talents have needed to be tweaked when they refer to a stunt so that they either grant the stunt or an alternate benefit. I’ve also been converting spells and class powers into new talents.

I think the next step will be trying to put together a game with the hack since that will provide me with some focus on what to convert next and also let me try out the changes that I’ve been making. Let me know if you’d be interested in being a guinea pig for playtesting.

I like in particular the idea that the stunts need to be learned. I would, in fact, make it so that you would need to find a trainer or a teacher to learn certain stunts, but mostly because I love forcing narrative and mechanics together.
Something like that is probably best left to the whims of the GM and his players, though.