I’ve been meaning to collect all of my Gamma World pdfs into a single compilation for a while (it was in my list of goals for 2012 after all). I’ve finally managed to get the compilation pdf put together, so here it is for all your Gamma World needs: 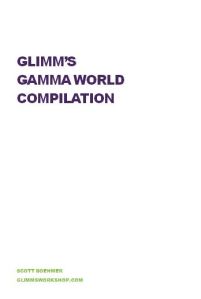 Also, I’d be interested in adding a few pieces of artwork to the compilation at some point, but my budget is limited since I’m not going to be profiting in any way from the pdf. If you either are an interested artist or know one, please feel free to contact me and we’ll see if we can work something out.

Hey, these are great! Just got the game myself, and was dubious at first (having been one of those old-school Gamma Worlders who remembers somehow making 3rd edition work despite the screwed up rules and the crazt ACT table) but it looks like the kind of thing my group would get a kick out of, and which I could enjoy in a shorter-term mini-series, so I’m looking at running it at some point.

I thought I’d mention that the Tyrannosaur Origin you have elsewhere on this site isn’t in the compilation. (It’s totally possible you felt the Saurian origin in the last expansion made it obsolete, but I saw that as a lizard-man deal, and took yours as more of being a straight-up dinosaur origin. Anyway…)

I may do up some origin and power cards matching those I’ve found online, since I want to streamline chargen and power usage that way. If I do, and if I make them available online, I’ll include a link in the post, and in the document containing the printable cards, that leads back to you… 🙂

Leave a Reply to 2013 in Review | Glimm's Workshop Cancel reply