Game of the Month: Committee for the Exploration of Mysteries 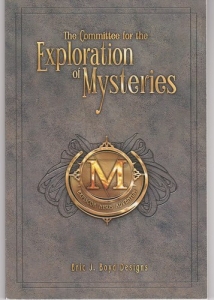 A couple of weeks ago, I attended the Gamerati Game Day in Tacoma, and played Committee for the Exploration of Mysteries for the first time. It is a GM-less role-playing game where the players cooperatively tell the story of a pulp-inspired expedition. The game is designed for expeditions set either in the Victorian era or the 1930s, but also includes some ideas for alternate settings such as a space romance or spy thriller.

A game starts with the players working together to establish the basics of the expedition. First, you choose a destination for the expedition and what object you are seeking at that destination. Then, you pick a handful of stops on the journey between the headquarters of the Committee and the destination. Finally, you work together to brainstorm a list of potential challenges that you could face. Our group decided on seeking out Atlantis in order to find a set of Innumerable Stones.

Next, each player creates a character. A character has four traits: Daring, Genius, Instinct, and Charisma. These traits have a number of d6 that they can contribute to a player’s dice pool as well as a short descriptor that can be used a limited number of times to add an extra die. In addition, a character has Gear and Associations ratings that work similarly to traits. Once everyone has finished the basics of their characters, the players take turns introducing them to the other players. After each introduction, the other players get a chance to add a new detail to the character being introduced that gets added to the character as an extra descriptor that isn’t associated with a specific trait.

The expedition is played out with each character telling a story from the expedition to the other members of the Committee. Each player starts his or her turn by setting the stage for the scene. Once the stage is set, the player says, “Little did I know what challenge awaited me.” At that point, another player takes the role of the opposition and narrates a challenge that arises for the character. For a challenge, the opposition then picks a number of ten-sided dice to represent the challenge’s difficulty and rolls the dice to get a target number to overcome the hazards. The active player then chooses a trait to use when facing the challenge and rolls the trait’s dice. Once the dice pool is rolled, the player pushes forward a die to go against the difficulty and narrates what action the character took. If the pushed forward die isn’t enough to beat the challenge target number, then the opposition player adds an additional complication. This back-and-forth continues until the character has pushed forward enough dice to total at least the target number at which point the challenge is overcome.

After overcoming a challenge, a character earns points called acclaim. The goal is to have an interesting story for the Committee, so a character gets the most acclaim for a challenge that took 3 trait dice to overcome with less acclaim if it either took less dice (too easy of an obstacle) or more dice (a character struggling too much). These acclaim dice can be spent to add extra dice to the dice pool, but they also are used to determine which character has the best outcome at the end of the expedition.

Play continues around the table with a couple of scenes at each stop along the journey until the adventurers reach their destination. For the destination, each character gets an individual scene and then the final climax is played as a special group challenge. A group challenge uses far more difficulty dice and has each player take turns adding dice to overcome the obstacle. Once that final challenge has been overcome, the expedition is over and each player describes an epilogue for his or her character. The character with the most acclaim gets to tell their epilogue first and then each later epilogue is constrained by the facts of the preceding ones.

One interesting rule is that Committee uses a 3-minute timer to limit the length of each turn. This timer is started when the player rolls the trait dice, and then keeps going until the challenge has been overcome. If a challenge isn’t overcome in time, the character either loses acclaim or the expedition is stymied and has to face a group challenge. Since most of us were new to the game, we didn’t use the timer the first time around the table. While I can see the extra challenge of the timer adding to the challenge of the game, I preferred playing without it. The timer limited the amount of storytelling and also was strange because the opposition player’s twists were also included in the 3-minute limit.

Committee also includes a drinking element that we didn’t use in our game. Each player is supposed to have a glass of thematically appropriate alcohol (or a non-alcoholic drink for non-drinkers) during the game. The amount in glasses is used to determine the ordering for group challenges. In addition, if two players both have their glass empty at the end of a scene, the expedition must face a group challenge.

One thing I especially liked from Committee was the collaborative brainstorming of potential challenges for the expedition. I could see a group working together to come up with ideas at the beginning of a campaign using any game, so that the GM has a list of adversaries that the players would like to see. In addition, after each scene in Committee the players can record one element that was notable in the scene to add to the expedition log as an encouragement for it to be brought up again on later turns. This could also be carried over to a campaign in a different game with the players each highlighting a part of a session or adventure they particularly enjoyed so that a GM can work to incorporate those elements in later adventures.

I also think it would be fun to add ability descriptors to D&D-like games as a hack. Each player would write a short bit about each of a character’s ability scores. These descriptors could then be used a limited number of times to gain a bonus. I’d also be interested in seeing how well it works to limit the use of a descriptor to only checks not using the matching ability. For example, a Diplomacy check wouldn’t be able to use the descriptor tied to a character’s Charisma, but could use the descriptor tied to another ability if the player can describe a creative way to tie it to the action.