Welcome to the Game Night Blog Carnival for September! You can get more information about the carnival at the main Game Night site.

a cooperative card game set in the Warhammer 40k universe that is published by Fantasy Flight Games. Between 1 and 6 players take the role of space marine combat squads tasked with purging a space hulk (a large, derelict ship drifting through space) of its genestealer inhabitants (stealthy aliens with razor-sharp claws). While space marines are mighty warriors, the genestealers in the space hulk are dangerous foes more than capable of killing the marines if allowed to swarm.

The game uses randomization during setup to help ensure replay value. Each player chooses their combat squad(s) randomly from amongst the 6 included in the game. Each squad consists of 2 marines, who vary in their attack range, and 3 special action cards unique to the squad. The locations on the space hulk are also randomly chosen based upon the number of players. Each location has different terrain, a varying numbers of genestealers, and a special effect that happens when the marines enter the location.

The game is played in a series of rounds where each combat squad gets a turn. At the beginning of each round, the players secretly pick an action card for each squad. These cards fall into three categories: support, move+activate, and attack. In addition to the card’s text, the type determines what that squad’s marines do on their turn. The cards also have an initiative number on them that determines the order that the squads act for the turn. This creates an interesting choice because attack cards have the highest numbers, meaning that they are likely to go last, so being too aggressive can open your squad up to attack before they get to act.

On each combat squad’s turn, the action card is resolved and the space marines act. For a support card, the player gets to give a single marine a support token that can be cashed in later to reroll an attack or defense roll. For a move+activate card, the player gets to move the squad’s marines within the formation, change the facing of the marines, and/or activate a terrain card. Finally, an attack card allows each marine to make an attack roll against a genestealer swarm with a 50% chance to kill a genestealer.

The final part of each round is an event card. One player draws a single event card that has an effect specified on the card but all of them also move genestealers to engage different marines and allow new genestealers to spawn. These cards include helpful effects like killing genestealers, nuisances like flipping the facing of the marines, to dangerous cards such as a psychic assault that can kill a marine.

The game is won when either the space marines cleanse the last location of its genestealers or the last marine falls victim to the claws of the xenos. Advancing to a new location in the space hulk requires the players to empty one of the location’s blip piles of its genestealers, so making it through the space hulk requires the combat squads to kill quite a few aliens. In my experiences so far, the game seems quite difficult to win. Swarms of genestealers can pretty quickly cut through marines, especially if allowed to spawn in large numbers, and even a single genestealer can be deadly with a bad roll. In addition, playing by the rules and choosing action cards in secret can make it easy for one player to accidentally screw up another’s planned actions. 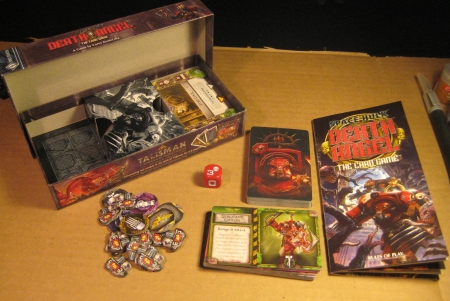 The game has good production values and includes everything that you need to play. The box has 128 cards, an insert that helps to keep the cards organized, the custom d6, cardboard squad and support tokens, and the rulebook. The $25 cost seems reasonable given the quality.

My one complaint about the game is the rulebook. The way it is organized required a lot of flipping back and forth while learning the game. It also presented the steps in a round in a confusing way that led to me to messing up my first game by having the marines all act before the genestealers attacked and needing to restart the game. The rules aren’t very complex though, so after a few games the rulebook organization shouldn’t matter much.

Edit: After chatting with a friend online and some more time trying to parse the rulebook, I’ve decided that my first interpretation was likely correct and all of the space marine actions should be resolved before the genestealers get a chance to attack. This should make the game a bit less difficult.

I bloody love this game! me and my girlfriend tend to ditch the rule about not playing the same card twice, it’s still a ruddy hard game, but you can win a tiny bit more often.