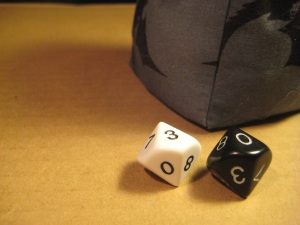 For the past few months, I’ve had a few ideas for a game system bouncing around in my head. These are mostly just an exercise in brainstorming that has resulted from reading about some of the D&D Next mechanics. I don’t expect to put together an actual game, but I’ve liked a few of the ideas that have come out of the thought experiments.

One of those ideas I’ve liked has been a dice mechanic:

At its heart, this system is just a 2d10 roll that is centered on 0 rather than 11. The 2d10 result distribution is triangle-shaped with a higher chance of rolling near the mean and lower probabilities for results near the edges of the result range, so characters are most likely to get a result close to their ability score (58% or rolls will be between ability-3 and ability+3). See this post for some more details on how 2d10 compares to 1d20.

What I like about this idea though is its focus on tangential consequences. Each die has a 10% chance of getting a 10, so 19% of rolls will have at least one 10 come up causing an interesting side effect. I also like the idea of the players getting to determine the positive side effect for a white 10 rather than just using a fixed effect like critical hits in most games.

I like d10s for a few reasons, but an easy tweak to this mechanic would be changing the size of the dice used. In addition to shrinking the overall range of roll results, using smaller dice increases the chance of getting side effects. For example, with six-siders each die has a roughly 17% chance of getting a 6 and about 31% of rolls will have at least one side effect.

A third tweak to the mechanic would be stepping back from the open-ended side effect declarations to a more defined list of options. This could be a list similar to the stunt lists used by Dragon Age, but without the stunt point element. Stunt options could be provided in wide categories like in Dragon Age (combat, spell, roleplaying, and exploration) or maybe even provided in lists specific to certain skills or actions (hacking, fighting, negotiating, etc) depending on the focus of the game.

Interesting mechanic. What if both dice land 10s? Both a positive and negative stunt occur?

Right, if both dice are 10s, then you get a result of ability+0 which could either succeed or fail depending on the action’s difficulty plus a positive side effect and a negative side effect.

Here’s how I’d do it. I wouldn’t have the maximum number do anything. I’d have something interesting happen when both dice roll the same number – Good if it’s even, bad if it’s odd. There would also be multiple levels of success/failure. Every three points over or under the target is a new category. Then I’d let people choose their die type for every roll. You’d use d4’s if you wanted to play it safe and d12’s when you wanted to roll for the fences.

Using doubles is similar to how Dragon Age handles stunts, except with only two dice rather than 3d6. That results in a lower chance of something special happening than if it is keyed off of the max values (10% chance of doubles on 2d10 versus 19% chance of at least one 10).

Another strange thing with this system is that a “play it safe” 2d4 has higher chances of a negative side effect due to doubles (12.5% chance for a negative side effect) than the “go for the fences” 2d12 (down to a 4.2% chance) even while the chance of a wide margin of success/failure on the main action increases. It seems like it would be better if the option to play it safe also reduced the chance of something interesting happening.