One of the gaming items I purchased at Gen Con was the Pathfinder Harrow Deck. It is a deck of 54 cards that each feature a different name and image, such as The Queen Mother or The Empty Throne. These cards are intended to be similar to a Tarot deck’s major arcana and in Pathfinder’s campaign setting can be used to perform a Harrowing and predict the future.

In addition to their names and illustrations, each card is associated with one of Pathfinder’s six abilities and an alignment. These are denoted on the card as a symbol representating the ability and its location on the card. For example, a shield in the top center of a card represents a Neutral Good alignment card tied to Constitution.

For a Pathfinder game, the deck provides rules for a Harrowing spell and guidelines for performing the Harrowing. For a Harrowing, a character asks a single question that they wish to have answered. Each player then chooses one of the 9 cards associated with the ability score that is most closely related to the question. These chosen cards are a specific message for the characters who draw them and how they fit into the question and answer. Finally, a selection of 9 cards are randomly laid out in a 3 × 3 grid. The first column represents the past, the middle column represents the present, and the third column represents the future. Using the guidelines in the rulebook, the DM is then able to choose which card(s) in each column to interpret and how they should be interpreted.

While using a Harrowing to answer an important question during the course of a campaign is an interesting option, I think it would be more fun to use the deck to cooperatively build a setting and flesh out the characters at the start of a campaign.

For this idea, ask each player to choose a central question related to their character. The player should already have a general character concept in mind, so the question should tie into that concept. Players should also feel free to create some setting elements with their questions. For example, the following questions might get asked:

Where can Valerna find the Sword of Justice?

What must Ander do to escape the Thieves’ Guild?

Will Garret be able to return his family to power?

The Game Master can then perform a harrowing for each player’s question with a few changes from the normal guidelines. First, each player should choose a random card from the 9 ability cards tied to their own question and then use that card as their role card for all of the questions. If a character’s role card is revealed as part of the harrowing for another character’s question, then it reveals a way that those two characters are linked. Second, once the GM chooses a card or cards to interpret from each column during a harrowing, the GM should ask the player a question related to the card in order to have the player fill in the character’s back story, present situation, and a glimpse of the character’s and setting’s future. Finally, one of the future cards should be interpreted by the GM as an answer to the player’s question.

For example, if during Ander’s reading the following spread is revealed: 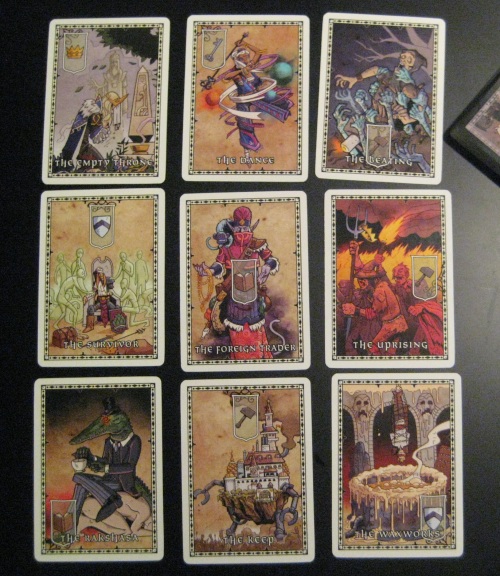 I see the Empty Throne in Ander’s past. Ander has suffered the loss of someone who meant a great deal to him. Who was it and what aspect of the person does Ander remember most?

The Rakshasa also dwells in Ander’s past. Ander spent time under the control of another person. Who exerted this control and how?

In Ander’s present, I see the Foreign Trader. Who is Ander spying on?

I also see the Keep in Ander’s present, but it is misaligned. What temptation is Ander allowing to get the better of him?

In the future, I see an Uprising. What kingdom will soon fall?

Finally, I see the Waxworks in Ander’s future. In order to escape the Thieves’ Guild, Ander will need to spend time in the dark dungeons of the Black Isle.

Once each character’s harrowing is complete, the GM will hopefully have plenty of setting tidbits and plot ideas centered on the party. These ideas can then be used to build the adventure for the first session of play and be returned to as ideas when it is time for new adventures in the campaign.