Game of the Month: Deathwatch 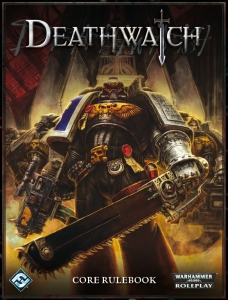 It’s been a couple of months, but Game of the Month is back! A few weeks ago, my group got together for a game of Deathwatch. It is a game ser in the Warhammer 40,000 universe where the players take on the role of superhuman space marines tasked with protecting the Imperium of Man and assisting the inquisitors of the Ordos Xenos.

For the session, I used the Deathwatch quick start rules from Free RPG Day 2010 (available online here). As a result, the players used pre-generated characters and we were probably missing some of the rules from the full game. For a one shot game though, the quick start rules worked pretty well and are definitely easier to digest than the full 400 page rulebook.

Deathwatch’s mechanics are based on a relatively straightforward d% system. Marine characteristics, which are modelled on space marine stats from the Warhammer 40k war game, provide their base chance to complete a challenging task based on a given characteristic. For example, a marine with a Ballistic Skill of 43 is going to have a 43% chance to make what the game considers a challenging shot. That base number can then be adjusted based on the difficulty of hitting the target, the weapon’s rate of fire, etc. Because assigning difficulties falls to the game master in most situations and there weren’t many guidelines in Final Sanction, picking reasonable difficulty modifiers was a bit of a challenge for me while running the game.

Because characters in Deathwatch are elite soldiers, they easily outclassed most of their opponents. For example, many enemies seemed to pose little risk to the marines because their weapons weren’t powerful enough to reliably penetrate the battle armor used by space marines. This is a good match for the story elements of the Warhammer 40k universe, but in play made some combats less exciting since the opponents had very little chance of success. My players also had some horrible luck with their rolls in some of the fights which had everyone in the game laughing since it seemed bizarre that a group of elite space marines would have as much trouble hitting a target as they did.

I ran the Final Sanction introductory adventure which pitted the marines against rebellious humans and a pack of genestealers. Because we only had a couple of hours to play, I had to fast forward through a decent chunk of the adventure in order to have time for the final encounter. The adventure was pretty well designed and I especially enjoyed the way that large battles were handled. For example, in the fight when the marines initially arrive on the planet, the adventure mixes waves of standard enemies with special turning points, such as rebels trying to set up a demolition charge, that are what really determine the outcome of the battle. That design is something that I’ll keep in mind for large battle scenes no matter what system I’m using.

Deathwatch is mostly compatible with the other Warhammer 40k Roleplay games published by Fantasy Flight. The games focus on different types of player characters and have some small variations in mechanics, but the core system is the same. These games allow you to play wealthy captains of merchant ships (Rogue Trader), members of the inquisition (Dark Heresy), cultists and marines devoted to the powers of chaos (Black Crusade), and soldiers of the Imperial Guard (Only War). While it is unlikely that players would mix and match different types of characters in a game, the compatibility of the games allows for a game master to draw on a lot of additional material beyond what is available in any single game’s series of books.

In the end, I’d definitely recommend Deathwatch or one of the other Warhammer 40k Roleplay games if you’re a fan of the table top war game, but I’m not sure gamers without that background would enjoy the system as much.

One of the interesting mechanics in Deathwatch is its system for hordes. These are rules for representing large groups of weak enemies and fill a system niche similar to minions in Dungeons & Dragons 4e. A horde has a magnitude rather than wounds like a normal character. Each time it is hit by an attack that overcomes its armor, the horde loses one point of magnitude. When making attacks, a horde is able to attack any opponents in melee range or make a number of ranged attacks based on its magnitude. While playing, the horde rules worked pretty well and let the players fight large groups of enemies without us getting bogged down tracking individual combatants.

Similar mechanics could be used in D&D to represent large groups of minions. Starting from a minion monster, choose a magnitude for the horde and give it a size based roughly on the number of minions it represents. For example, a horde of 30 troglodyte warriors could have 30 magnitude and take up a 5 × 5 area. Each time a horde is hit by a ranged or melee attack, reduce its magnitude by 1. When hit by a blast or burst, instead reduce the magnitude by the number of squares of the horde’s space that overlap the blast or burst. It is probably easiest to ignore conditions and other attack side effects unless it makes sense that it would apply to the horde as a whole. A horde’s melee and ranged attacks should be updated to allow a number of attacks equal to the magnitude divided by 5 per action (the troglodytes could make 6 club attacks divided amongst any number of targets in range). For an added twist, the horde could be replaced with a handful of standard minions who act as individuals once its magnitude is reduced to 0.