Welcome to the Game Night Blog Carnival for February! You can get more information about the carnival at the main Game Night site.

Ascension is a deck-building game from Gary Games where players defend the world of Vigil against monsters invading from another plane of existence. The base game comes with 200 cards, 50 honor tokens, and a game board for about $40. There are also two expansions which can be played as standalone games or combined with the base game.

At the start of a game, each player has a deck of basic cards (Apprentices and Militia). The Cultist card, a weak monster, is set up along with Mystics and Heavy Infantry cards as basic cards that are always available. The rest of the cards make up the portal deck with the top 6 of those cards revealed. These 6 cards can be purchased and added to your deck, in the case of heroes and constructs, or defeated and banished, in the case of monster cards. After a card is either purchased or banished, new cards are drawn from the portal deck so that 6 cards are always available.

Each turn, you play your hand in order to generate two resources: runes and power. Runes are used to purchase new cards to add to your deck. Power is used to defeat the monster cards which earns points of honor. You can buy as many cards and defeat as many monsters as you have the runes and power to manage. This ability to take multiple actions in a turn gives the game a fast-paced feel and means that the set of available cards to purchase or fight can be very different from one turn to the next. 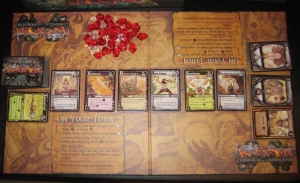 The game ends when a certain number of honor points have been won. At that point, each player totals their honor points and the honor value of the cards in their deck to get their final score. Then the player with the highest score wins.

The heroes in Ascension come from several different factions that each have their own unique feel. My favorite two factions are the Void and the Lifebound. Cards from the Void faction tend to have powers that let you remove cards from your deck which is very useful to get rid of low-powered cards in order to give you a better chance of getting your more useful cards. The Lifebound faction has cards that generate honor points when played and that have more powerful effects when you have more Lifebound cards in your hand. The other two factions are the Mechana, which focuses on expensive construct cards with high honor values, and the Enlightened, which has numerous cards that allow you to draw extra cards each turn.

Ascension was very easy to pick up when I first played it, and has fun, fast-paced game play. The availability of Cultists, Mystics, and Heavy Infantry assures that there is always something to do on your turn, and the cycling of the 6 available cards means that there are new opportunities each turn. The limited set of available cards also causes competition for good cards, especially since some cards give you the ability to banish cards from the available set without needing to defeat or purchase them.

Either Ascension or Thunderstone, the game I reviewed last month, would make a great introduction to deck-building games. Thunderstone has a more traditional fantasy dungeon delve theme and a better way to handle expansions, but Ascension seemed easier to learn and had faster-paced, more directly competitive game play. I’d happily recommend either one to someone looking for a new game to try.

Previous blog in carnival: Roving Band of Misfits (Amun Re)

[…] a few options, and ended up buying a copy of the Resident Evil: Alliance. I’ve enjoyed both Ascension and Thunderstone quite a bit, so I figured trying another deck-building game would be […]