Welcome to the Game Night Blog Carnival for January! You can get more information about the carnival at the main Game Night site. 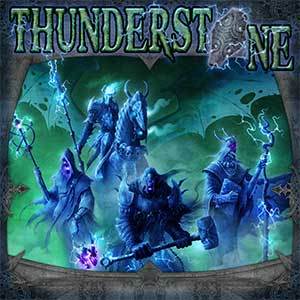 Thunderstone is a deck-building game from Alderac Entertainment Group where players control a band of fantasy adventurers exploring a monster-filled dungeon in search of the thunderstone. As with other deck-building games, you start the game with a small deck of basic cards and then add more powerful cards to your deck during play.

Before this year, I had never played a deck building game despite their recent popularity. Then I had a chance to play both Ascension and Thunderstone this month. I’ve enjoyed both games and really like the dynamic of planning a deck and acquiring cards during play.

Each turn in Thunderstone, you can pick between three actions for your band of heroes: visiting the village, entering the dungeon, or resting. Each of those options lets you do different things on your turn, but over the course of a game you’ll likely do all three.

When you visit the village, you are able to spend the gold generated by your hand in order to buy new cards for your deck such as heroes, weapons, and spells. Adding these cards to your deck is important because you’ll need better cards in order to be able to defeat many of the monster cards. 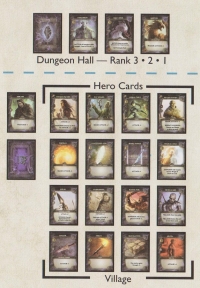 When you enter the dungeon, your heroes fight a monster. Fights are resolved by comparing the attack generated by your hand against the health of a monster. Defeating a monster adds its card to your deck, which gives you victory points at the end of the game, and also gives you experience points to level up your heroes. On the other hand, if you lose the fight, the monster just returns to the dungeon deck and you don’t gain any experience points or the victory points for the card.

The third option for your turn, resting, is used to remove a single card in your hand from your deck. This option seemed most useful for removing disease cards, which reduce your hand’s attack value, or other low-powered cards from your deck.

The game ends when the thunderstone reaches the top of the dungeon. At that point, each player totals the number of victory points in the deck, and the player with the most points wins. The main way to earn victory points is by defeating monsters in the dungeon, but completely leveling up heroes also earns a few victory points per level 3 hero.

The initial setup and learning to play was a little overwhelming for my wife and me. After opening the box, the cards needed to be sorted by individual type and the rulebook and card design weren’t very conducive to just jumping into a game right away. The rules aren’t actually that complex though, and once I had spent the time to read through the rulebook and figured out what the various numbers on the cards indicate, we were able to play without any trouble.

One cool aspect of Thunderstone is that each game uses a different subset of the cards. When setting up a game, you pick special randomizer cards in order to determine which monsters, heroes, and village items are available in the game. This makes each game different and seems like a better way to handle expansions, of which Thunderstone already has several, than just using an ever-larger deck of cards.

Another mechanic that works well is the need for light in the dungeon. The dungeon hall has 3 ranks with each consecutive one being darker (1 point in the 1st rank, 2 in the 2nd, 3 in the 3rd). This light penalty turns into a reduction in your hands attack value when fighting a monster. In order to avoid the penalty, you need cards that grant light such as torches. The way the rules for light are presented is a little confusing because the attack penalty is twice the light penalty, but it adds a neat way for cards to contribute to a fight other than just granting an attack bonus.

AEG recently announced Thunderstone Advance that updates the Thunderstone rules. The new version is supposed to be compatible with all of the existing Thunderstone cards while adding new features. In addition to new art and cards, the game will include updates to card layout, a game board, and a learn to play booklet. The improvements look pretty impressive, and it sounds like a perfect starting point for someone interested in playing Thunderstone.

Thunderstone is also available as a facebook app. I haven’t played much on facebook yet, but the tutorial for it is a great introduction to the game’s rules.

If you’re interested in trying out a deck-building game, but haven’t had the chance yet, then I’d recommend trying Thunderstone’s facebook app and, if you like it, picking up Thunderstone Advance when it’s released March.

Next blog in carnival: Roving Band of Misfits (Thunderstone)

Disclosure: I received a free copy of Thunderstone from Alderac Entertainment Group in exchange for writing a review of the game.

[…] Ascension or Thunderstone, the game I reviewed last month, would make a great introduction to deck-building games. Thunderstone has a more traditional […]

[…] and ended up buying a copy of the Resident Evil: Alliance. I’ve enjoyed both Ascension and Thunderstone quite a bit, so I figured trying another deck-building game would be […]