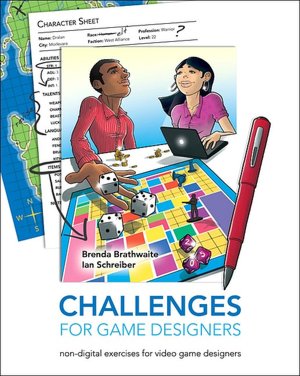 One of the presents I was given for Christmas was Challenges for Game Designers by Brenda Brathwaite and Ian Schreiber. The book describes itself as “non-digital exercises for video game designers,” but it was the non-digital portion that attracted my attention rather than the goal of video game design. So far I’ve only read the first two chapters which have been an introduction to game design and a brief overview of different core dynamics for games to use.

The aspect of the book that I’m most interested in is the set of challenges that is included at the end of each chapter. These challenges ask you to create a game prototype given certain constraints. For example, the first challenge asks for a “race to the end” game where the players compete with one another. I’m looking forward to having fun coming up with different game prototypes, and I’ve decided to try to share the prototypes by sharing them on the site as I complete each challenge. I won’t be spending much more than an hour or two on any challenge and probably won’t do all of them, but I think it’ll be fun to experiment with different game ideas and share the results.

As I publish about each challenge that I do, I’ll tag the posts “Challenges for Game Designers” to make them easy to find.

One reply on “Challenges for Game Designers”

[…] Challenges for Game Designers, Mario Kart, and Lords of the Underdark This series of posts was an early casualty to my work schedule picking up, but I really liked making the game prototypes. If I can manage my time better this year, I’d like to start these up again. […]