Game of the Month: Technoir 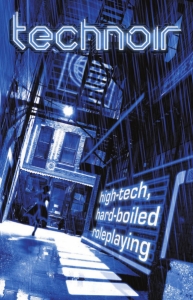 October’s game-of-the-month was Technoir by Jeremy Keller which is described as a game of high-tech, hard-boiled roleplaying. I first heard about Technoir during its funding drive on Kickstarter. A few of the people I follow on twitter played a game with the beta rules and were raving about it afterwords. That was enough to get me to take a closer look, but what really convinced me to contribute was the promise of a Mechnoir alternate players guide since I have a soft spot in my heart for big stompy robots.

The game is a relatively rules-light system that plays fast and fits its genre well. A character consists of a handful of adjectives that are reminiscent of the Fate’s aspects and ratings for each of nine verbs, such as Fight and Hack, that are used to represent how skilled the character is. The thing that makes characters really interesting though is their connections. These are relationships with NPCs that allow the characters to gather information and move the plot forward.

On the GM’s side of the screen, Technoir encourages the use of a plot map to create the game’s story during play. A transmission, Technoirs version of a setting book, contains tables of connections, threats, events, factions, locations, and objects that are used to randomly generate ideas as the player characters investigate the initial story seed. Even that initial seed is randomized by rolling three items from the transmission. This approach requires the GM to think on their feet while building a story out of the random elements, but it also means that the story can take twists that are interesting and surprising for everyone at the table.

For our game, I used the Twin Cities Metroplex transmission that is available as a download from the Technoir site. The three initial entries on the plot map were Arma Winn, a pawn shop owner; Dok Petrov, a cybernetics doctor; and renegade cyborgs. I ended up deciding that the Dok Petrov had helped design the cyborgs’ components and then sold the scrap parts to Arma. A lot of my players had chosen to use Arma as one of their character’s connections, so I started off the game with her being gunned down by the cyborgs. That initial hook got all of the players interested and helped drive home the darker aspects of the setting. The random plot generation ended up resulting in links between the cyborgs and Daedalus Innovation, a major local company, that was creating a gene-targeted herbicide to dominate the world’s agricultural markets. In the end, my players confronted the cyborgs and got a rival company, Cybertronic Systems, to help stop Daedalus from using them to kill threats to their herbicide program.

While the mechanics of Technoir don’t feel like they would transfer well to many other games, I think the idea of random plot generation using mini-setting books like transmissions could work well for intrigue-focused plots in any game. For example, in D&D you could have a “sending” booklet for a city.

As an example, let’s use the city of Sigil. To generate an initial adventure seed, you can generate three items from the following table by rolling 1d6 to determine the type and then 1d6 to pick the entry. Once you have the three items, create story links between each pair of them. For example, if I rolled Shemeshka and Assassination Attempt, then perhaps Shemeshka has hired an assassin to kill another resident of the city or alternatively she could be the assassin’s target. From these initial plot points, you then have a seed to start the adventure and can roll more random plot points as the characters investigate.

If you’re not familiar with Sigil, you can read more about it in D&D 4E’s Manual of the Planes or D&D 3.5′s Planar Handbook. Also, a full sending booklet would contain statistics for the connections, objects, and threats as well as random tables tailored to each connection for which other plot items they could be linked to.