Welcome to the Game Night Blog Carnival for October! You can get more information about the carnival at the main Game Night site. 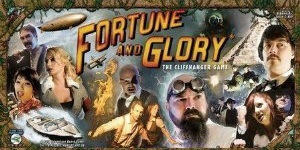 Described as the Cliffhanger Game, Fortune and Glory is a game of treasure hunting inspired by Indiana Jones and other pulp adventures. It is the most recent game from Flying Frog Productions and retails for around $100. The game can be played with anywhere from 1 to 8 players, but I’d recommend a group of 4-6. The game can be played in a couple of hours, but can take longer while learning the rules or with larger groups.

In the game, each player takes the role of an adventurer scouring the globe for ancient artifacts while avoiding mobsters, nazis, and other dangers. The game can be played either competitively or cooperatively, but so far I’ve only played competitive games where the first player, or team of players, to reach a set number of fortune wins the game. In the cooperative game, all of the players work together against either the nazis or the mob.

At the beginning of the game, four randomly chosen artifacts are scattered across the map of the world. The players then move towards these artifacts in hopes of selling them for fortune. Just reaching an artifact’s location isn’t enough to claim the treasure though. An adventurer must overcome a number of dangers first. Each danger card has a test that a character must pass in order to get closer to the artifact. For example, an Ancient Puzzle danger requires a lore test. Each of the 8 adventurers included in the game has different skill values, so some dangers are easy for certain characters but challenging for others. If a danger’s test is failed, that player’s turn ends and the danger card is flipped to reveal a cliffhanger that the adventurer must overcome on his or her next turn.

In addition to collecting fortune, players have a couple other resources. Glory is earned from each danger a player overcomes and can be spent on allies and gear that boost a character’s abilities. Event cards, which are gained in a couple different ways, offer an opportunity to help or hinder other players. In the games that I’ve played, event cards have been the source of a lot of fun as players steal artifacts, cause other adventurers to get stuck in bad weather, or otherwise alter the course of the game.

As with the other Flaying Frog board games I’ve seen, the production quality is top-notch. The game comes with miniatures for each hero and villain, plastic coins to keep track of fortune and glory, cardboard markers for wounds and other counters, and even a pulp-inspired sound track.

The three times that I’ve played Fortune and Glory so far have all been a lot of fun, and I’m glad I picked up my copy at PAX this year. If you’re a fan of board games and pulp adventures, then you should definitely consider purchasing a copy.

Next blog in carnival: Roving Band of Misfits (Cthulhu Dice)