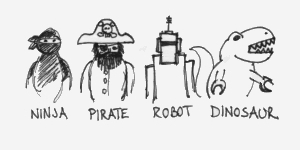 Alert! Alert! All agents assemble in the chronochamber!

A couple months, ago I was thinking about dice mechanics and came up with an idea for a time travel game where the characters (and players) are forced to balance their actions against the risk of causing a dangerous paradox. My idea was to have the game use 2d6 for its rolls but always have the players roll an extra die of a different color, called the paradox die, that they could choose to use in place of one of the normal dice. The trick is that each time that extra die is used, the risk of a dangerous paradox goes up.

Since coming up with that basic idea, I’ve found myself drawn back to it and I’ve slowly filled out more of the game. I wanted it to be light-hearted, and I figured that the players should be able to pick from the best possible agents from anywhen in the world’s timeline: ninjas, pirates, robots, and dinosaurs. These characters would be brought together by a secret organization working to preserve the timestream in order to go on missions to stop the evil villains who seek to use time travel to their own advantage and risk destroying the entire timeline.

To help make each type of character feel distinct, I decided that they would each have a different resource type: ninjas use stealth, pirates use rum, robots use energy, and dinosaurs use terror. Each resource has different charge up mechanics and spending the resource is necessary for the characters to perform special moves and attacks. For example, each time a dinosaur hurts an opponent, it gains a terror point, and then it can spend those points to perform a special move such as a roar that makes nearby enemies flee the scene.

I want the game to play pretty fast, so my current draft uses a pretty light-weight rules system. A mission consists of several scenes as the team infiltrates a villain’s lair to disrupt their nefarious plots. In a given scene, the team might have to overcome obstacles, confront the villain’s underlings, or both. Opponents and obstacles range from minor threats that can be bypassed with a single roll (jumping over a pit, beating up a hired goon, etc) to major threats that require a number of successes to overcome (major henchmen, diabolical death traps, or the villain itself). Movement isn’t really tracked within a scene other than keeping track of which characters and enemies are engaged in melee.

When a character takes an action, they generally roll and add one of their statistics to it and then compare against the action’s difficulty. Because the characters are assumed to be amonst the most talented in the entire timeline, the difficulties are set so that most reasonable actions will be successful but beating a difficulty by 3 or more indicates a critical success that has extra effects. For example, a critical success to climb a wall lets a character bring another character with them to the top. However, if a character fails a roll by at least 3 then it is a critical failure. A critical failure while climbing the same wall could be a fall that injures the character and slows them down for the rest of the scene (or even the entire mission).

Right now I only have a very rough draft of the game’s rules written, but I’m hoping to clean them up into something that is playable within the next couple months. Once I have it ready to share, I’ll post a pdf on the site.

This idea reminds me of Zombie Ninja Pirates

Zombies, Ninjas, and Pirates, how Mad!

Zombies are cool! Ninjas are cool! Pirates are cool! Mad Scientists are also cool! But the coolest thing is a card game where you get to play all four types while scoring points and getting nifty objects in your chest that make you cooler and help you win.

In Zombie Ninja Pirates you try to become four different types of people — Zombies, Ninjas, Pirates, and Mad Scientists. During the game you can collect objects to help you or hurt your opponents. At the end of the game, a fast-paced lightning round can make or break the winner.

Is this a role-playing game at its core or a dungeon crawl?

I’d consider more of a dungeon crawl – similar to the D&D board games or Super Dungeon Explore. You can get as much into character as you want, but I’m not planning much of the character advancement or customization that you’d expect in a full role-playing game.

I was thinking last night about it. What if you made it player-driven? Used random time rift cards to determine the events or a story book where you flipped to different pages or perhaps both? I think the mood your probably shooting for would work for this, because it would create some completely random hilarious situations and make for insane dungeons. For example, your romping around a space station and draw a time rift encounter card. Oh noes, steam-powered tyrannosaurus in the space station!

I could definitely take that approach – drawing obstacle cards for the current scene and then working together to overcome them.

[…] Ninja, Pirate, Robot, Dinosaur A rough idea for a game that I haven’t been able to get out of my head. […]