Welcome to the Game Night Blog Carnival for August! You can get more information about the carnival at the main Game Night site.

I spent last weekend at PAX, so I decided to write about two games that I had played while waiting in lines at the convention: Zombie Dice and Cthulhu Dice by Steve Jackson Games (the same company that makes Munchkin). 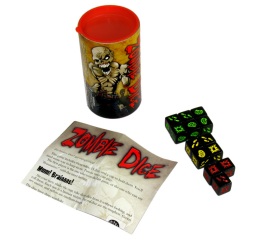 When playing Zombie Dice, you take the role of a zombie on the hunt for brains. You pick three dice at random and roll them. Each die can end up being a brain, a shotgun blast, or an escaped human. After a roll, you can choose to re-roll any dice that ended up as escapees plus new dice to bring your total roll up to 3 dice again. The goal is to get as many brains on your turn as possible without collecting 3 shotgun blasts. If you do end up with 3 blasts, then your turn ends and you lose any brains that you had collected so far that turn.

This setup produces a fun game of risk management: do you play it safe and take the brains that you’ve collected so far or roll again and risk losing them all? If you’re looking for a good game to play in con lines or while waiting for everyone to show up on game night, then I’d highly recommend picking up a copy of Zombie Dice.

In Cthulhu Dice, you play as a cultist of Cthulhu that is fighting against rival cultists. Each turn, you roll a special d12 to make an attack against another player. Depending on what you roll, you might gain or lose sanity tokens. If you run out of sanity, you go mad, but if you’re the last sane cultist, you win the game. It is also quite possible that the last couple cultists go insane during the same turn in which case everyone loses (except Cthulhu).

While Cthulhu Dice was fun as a quick game while waiting for the expo hall to open, it doesn’t have much depth – you pick who to target each turn, but otherwise its just a random roll of the dice. While playing we also noticed that the players who went mad were able to pretty much choose the game’s winner by picking who to attack. To remedy that a bit, I’d be tempted to instead have insane cultists roll and only act if the die comes up as Cthulhu (everyone loses a point of sanity) or the Elder Sign (they become sane again) so that they don’t get to choose a target. Because of these problems, I definitely prefer Zombie Dice over Cthulhu Dice, but the price point for Cthulhu Dice is low enough at $5 that you could justify it just for the cool Cthulhu-themed d12.

Next blog in carnival: Wombat’s Gaming Den of Iniquity

[…] Note: In August, Glimm’s Workshop also reviewed Cthulhu Dice along with Zombie Dice for the Blog Carnival. Check out his thoughts here. […]