Almost all role-playing games use dice to determine the outcome of actions. The ways that dice are used varies widely though and can have a large effect on the mathematics of a game system as well as how it feels at the table.

These changes to the probability curve have a big impact on the game. To demonstrate that, let’s look at a first level fighter’s chance to hit a range of enemies. Assuming the fighter has a +6 attack bonus:

As those numbers demonstrate, using 2d10 rather than 1d20 would make it easier to hit opponents that you outclass while making it harder to get lucky and hit an opponent that outclasses you. This would have a big effect on the game because lower level opponents would become unchallenging more quickly and higher level opponents would be too dangerous to introduce without some serious re-balancing of the system’s advancement math.

Using an Even Distribution

Rolling a single die has an even chance of generating any number in its range – your odds of rolling a 20 are the same as an 11 on a d20 for instance. This even distribution of values means that the probability of rolling a certain target number or higher changes in a linear way. Any +1 on a d20 results in a 5% increase in rolling a fixed target number (up to point where success is guaranteed).

For a game, even distributions offer a couple big advantages. First, its easy for players to quickly figure out the odds of hitting a certain target number – the math is always just dividing the number of successful results by the number of sides on the die. Second, it helps to make game balance easier because giving a bonus almost always has the same effect on the game’s probability. For example, if I want to create a power that gives a bonus to hit in exchange for less damage potential, I know that a -2 attack penalty means a 10% less chance to hit on a d20 and can then balance it with a 10% boost to damage.

Rolling several dice and adding together the results causes a curved distribution where you are more likely to roll numbers near the average result than those at the extreme ends of the ranges. This means that the probability of rolling a certain number or higher is non-linear – a +1 bonus results in a different percentage increase in the probability of succeeding on a roll depending on what number you need to roll to succeed. 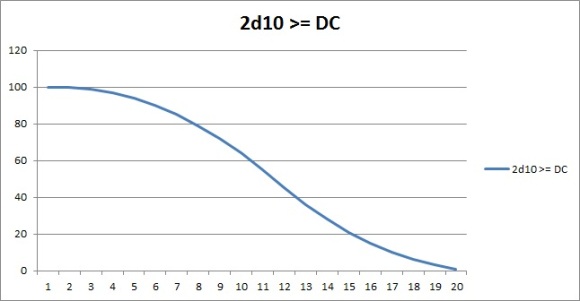 For a game, this distribution tends to better mimic reality where you are likely to perform near your average result rather than having a flat distribution over a wide range of results. A curve means that most of the time a roll will be about average for a character while still leaving a small chance that the character gets lucky (or unlucky) and ends up with a result far from average. The biggest drawbacks of a curved distribution is that their probabilities are harder to quickly estimate during play and they can make balance trickier especially around stacking bonuses (especially for rolls with large numbers of dice and steeper curves).

More Than a Random Number Generator

One neat trick in some games is to use specially colored dice or dice of different sizes in order to allow extra pieces of information to be generated by a roll rather than just a single number. For example, in the AGE system you roll 3d6 for most rolls, but one of the dice is a special color. This allows each roll to give you both its result to compare against a target number and a margin of success determined by just the value of the special die. Alternatively, the extra information might not have a mechanical effect on the game but could instead guide its story. For example, in a Cortex Plus game, you roll a pool of dice where each die comes from a trait of some sort. You then pick two dice to add together for your roll’s result. Because the dice are tied to traits, the dice that you pick can guide the story and explain how you succeed at your task.

While most role-playing games use dice for randomization, there are other options. A deck of playing cards is effectively a d13 where the suite of the card is a convenient way to add extra information. Leaving jokers in the deck could add an extra twist. Do: Pilgrims of the Flying Temple is an example of a game using something other than dice as its random element; it uses black and white stones drawn from a bag to determine the flow of the story.

Finally, while almost all role-playing games use some sort of random element, there are a lot of traditional games without any randomness. For example, neither checkers or chess use any random numbers. In a role-playing game, you could forgo randomization but still make the game interesting and fun.

For example, imagine a martial arts themed game where players have a range of fighting styles they know. Each style beats some styles but loses to others. During each round of a duel, the players involved simultaneously pick the style their character is using and that determines the winner. Effectively this is a game of paper-rock-scissors, but it potentially has far more than three choices.

What Are Your Favorites?

Which dice systems are your favorites? Have you played any games that use a different method or randomization or eschew random elements altogether?

I’m a big fan of diceless/randomless games. That said, I do prefer a single die (or single die roll) system over dice-pool style systems.

I’ve run several games that use cards and one that uses stones as a way of adjudicating events but by far my favorite games I’ve run are those that are truly diceless.

Which are your favorite diceless/randomless games?

I enjoy smaller dice. Typically a d20 is so large that a +1 bonus doesn’t feel like much of a change. When you’re only rolling a d10, that +1 seems a lot more meaningful.

Oh, and I also really enjoyed Dragon Age Origin’s system. Critical hits are so uncommon that they don’t seem significant in a system like D&D, but in Origin’s you have a 44.44% chance of something cool happening.

I’m really enjoying the 2d6 used in Traveller at the moment. The curve means that if you are trained (enjoy a +1 or +2 bonus) at something most of the time you will succeed an average difficulty and if you are not (have a -3 penalty) most of the time your will fail. Occasionally you’ll screw up or unexpectedly succeed, or do an amazing job. This really adds to the feeling of the characters being normal Joes who are good at some stuff in the game.

Of course this means that 2d6 is not suitable for a game where the characters are meant to be heroes that are uncommonly good at stuff like D&D. The d20 with constantly growing modifiers work much better there.

Systems like Cortex (plus) and WoD work well in both ways as you can choose how heroic you want the characters to be at character creation and have either your everyman or your epic heroes. Although the Cortex way of doing things can be more finely tuned that the WoD style dice pool, which appears a little clumsy next to the newer system. Don’t get me wrong though it is perfectly serviceable. I’m not knocking throwing a bunch of d10s, that’s a reward in itself.

This is a fantastic post, and it really helped me find the right words to describe what I have found in playing and creating my own system. I prefer the 2d10 with exploding doubles method myself, but to each their own 🙂 I hope you don’t mind, but I borrowed a couple of the graphs and put links to your site underneath them. I doubt it’ll generate much traffic as my site is new, but if it does fantastic!

Thanks, I’m glad it helped you out. I don’t mind you borrowing the graphs as long as you’re linking back here.

[…] each size, but for Marvel it is pools of dice of mixed sizes being rolled. I wrote a Core Mechanics post on randomization last year, but I decided to write a follow-up specifically to look at the […]

[…] a result close to their ability score (58% or rolls will be between ability-3 and ability+3). See this post for some more details on how 2d10 compares to […]

Leave a Reply to Glimm the Gnome Cancel reply