At the beginning of the year, I set out a few gaming goals, and now that we’re half way through 2011 its a good time to look at how I’m doing.

Publish 2-3 posts each week: So far this year I’ve written about 50 posts which means that I’m averaging about 2 posts a week. Lately though, I’ve had a fair number of weeks with just 1 post. I’d like to get back to 2-3 each week, but in order for that to work out I need to find more time to write.

Finish the Gamma World archetype origins: I’ve written and published 7 out of the 8 origins that I originally planned. I should finish up the Wanderer origin by the end of summer.

Finish the cinematic combat series: This series had a less defined scope than the origins, but I think

Bring my current D&D campaign to a good conclusion: This is progressing a little slower than I had thought it would in January, but I still think I’ll wrap things up within a couple of months.

Run a Star Wars Saga Edition mini-campaign: Not yet. Once my D&D campaign wraps up, there’s a chance I’ll start running Star Wars.

Run a BattleTech mini-campaign: Not yet. As with Star Wars, there’s a chance that this will be the next campaign that I run. I probably won’t manage to run both before the end of the year though. Maybe I can manage to run a couple one-off battles though if I run the Star Wars game instead.

Run or play more non-d20 system games: I ran a short game in Dragon Age, and I’ve played a bit of Dresden Files and Leverage. I’ll probably manage to play a couple more systems in the next 6 months, especially if Epic Game Day 3 ends up happening before the end of the year.

Work on Sword of Terra

Write an updated version of the game: I’ve done work on a few of the rules, but so far I haven’t compiled them into a single document. I really need to set aside some time to focus on combining everything and finishing a new pdf version.

Get art for the game: I haven’t really made an attempt at getting art yet. If you know an artist who might be interested in drawing a bunch of space ships or some futuristic faction logos, let me know.

I started painting miniatures again a couple months ago and I’ve now finished about 500 points worth of Eldar for Warhammer 40,000. I’ll continue expanding that army over the next few months, but wouldn’t be surprised to also have some Warmachine and/or Super Dungeon Explore minis to paint by the end of the year.

I’ve been making progress on the Knights of the Old Republic trade paperbacks and started reading the Star Wars Legacy series. Are there any other comics in trade paperback that you’d recommend reading? 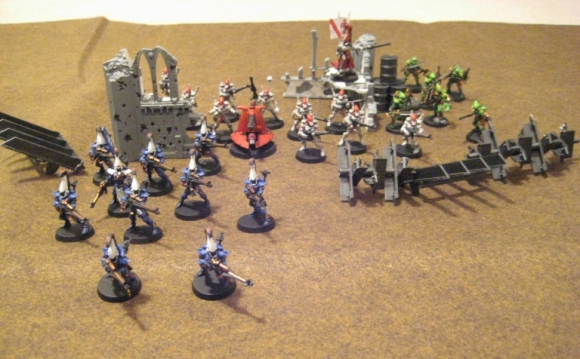 Don’t forget to count Super Dungeon Explorer as a non-d20 and as painting miniatures. Also, I think Magic should be on there somewhere.

Yeah, I am really looking forward to playing Super Dungeon Explore and hope they have it available at PAX this year. When I wrote the goals, I didn’t expect to get back into playing Magic this year, and it really doesn’t fit any of them.

Yeah, it’s too bad you didn’t have a goal of “Get my butt kicked by my little brother,” because then Magic cards would fit perfectly.

Sad, but true. I’m still trying to work up to not getting my butt kicked by Stef and her golem deck.