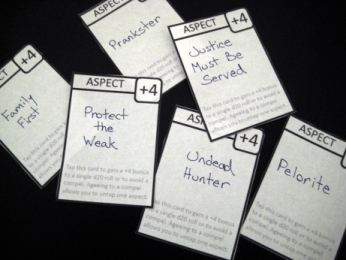 As I mentioned in my post about the Dresden Files RPG, I really like how well aspects from fate work as a mechanical system for character traits particularly personality and motivations. The open-ended design and ability for aspects to work either for or against a character seem to make them a great alternative to the alignment system in D&D.

Rather than picking a traditional alignment value, a player picks 2 or 3 aspects related to their character. These can be things similar to traditional D&D alignments, such as “Protect the Weak”, or concepts that don’t fit as neatly into an alignment grid, like “Family First” or “Impulsive”. If desired, a DM can ask players to pick aspects in different categories such as personality, beliefs, and motivations.

Similarly to the Fate system, these aspects could be used by players to gain a bonus when their characters are performing actions related to the aspects. When making any d20 roll related to an aspect, a player can tap that aspect in order to gain a +4 bonus on the roll. At most one aspect can be used per roll, and after being used the aspect remains tapped and not available for another use until the end of the current adventure or major quest.

A DM can also compel a character to act in accordance with an aspect. The player can choose to tap an available aspect to not follow the compel, but if the player agrees then one of the character’s tapped aspects becomes available for another use. For example, a character with the “Hates Undead” aspect could be compelled to be hostile towards a vampire NPC that the party wants to negotiate with for needed information.

I’m definitely not the first person to try to integrate aspects with D&D. Fauxspects, written by Gamefiend, integrate aspects with the power economy rather than adding an additional point system to the game (Fauxspects parts 1 and 2). Wrath of Zombie has used a much wider set of effects when integrating aspects with Pathfinder. I’m sure there are also a lot of other approaches out there that I haven’t seen (or have seen but don’t remember offhand).

9 thoughts on “Aspects as Alignment”