This is another Gamma World origin designed around a character archetype rather than a mutation. You can see the other origins in the series here.

While most residents of Gamma Terra focus on the struggle to keep themselves alive, a few have taken it upon themselves to rick their lives defending entire communities. Some of these brave individuals wear old sheriff badges that have been passed down for generations, but others are simply members of a town or camp that have decided to stop standing by as the hazards of Gamma Terra threaten their neighbors.

In order to capture the right feeling for the origin, I borrowed the marking mechanic used by defender classes in the main Dungeons & Dragons game and paired it with abilities to allow the Protector to stay between dangerous opponents and his or her allies in order to serve as a bodyguard to less melee-capable characters. 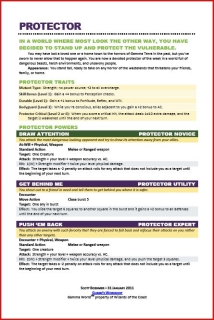 [Updated 31 January 2011: I made a few small changes to the origin thanks to some feedback from Dazed (save ends).  The marking effects now last until the end of the Protector’s next turn to match the mechanics of the D&D Fighter class, and Get Behind Me now specifies that the target cannot slide into a square adjacent to an enemy.]

UPDATE: I’ve compiled all of my Gamma World material into a single pdf. You can download the latest version here.