This post is part of a series on cinematic combat in Dungeons & Dragons 4E. You can see the other posts in the series here.

The rules and guidelines of Dungeons & Dragons provide the game with a certain amount of built in pacing. How quickly characters gain new abilities, the number of challenges a group should face in a given day, and how many rounds a fight should last are all determined by assumptions built into the game. While this has helped the developers deliver a well balanced game, I’ve recently come to the conclusion that many of those assumptions are different from the types of stories that I want to emulate in my games. 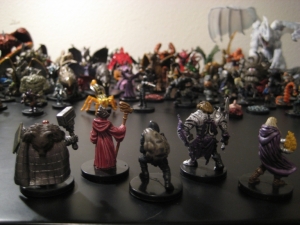 When I first started DMing 4E, I followed the encounter mix guidelines in the Dungeon Master’s Guide pretty closely. Those guidelines suggest about 8 encounters plus a major quest each character level. As my campaign progressed though, I found myself feeling like I was adding a lot of filler encounters which were eating up a lot of play time but not doing much for the campaign’s story and grew dissatisfied with the recommendation.

Looking at the guidelines and doing some quick math, it’s easy to see why I felt like I was putting in too many fights. Following the guidelines for a single tier, a group of characters will have about 80 fights. Assuming an average of 5 opponents each fight, that means a party will kill around 400 opponents each tier of play. In a campaign spanning all 30 levels, the players will have to manage nearly 240 encounters in which they overcome about 1,200 opponents.

I like the idea of a campaign spanning a wide range of levels, but I don’t have time to run that number of encounters. In my games, each combat takes about 45 minutes, so that would be about 180 hours of play time just to fit the combat encounters to reach 30th level. My group usually plays for about 2 hours per session and probably averages one session every other week. That means we’d be on track to finish a full campaign in 3 ½ years if all we did was one combat encounter after another.

I’ve gradually reduced the number of combat encounters that my players are faced with each level. In fact, during the course of their last character level my players only had 3 fights. I feel like this reduction has let me spend more time making each encounter interesting and at the same time enabled the encounters to better match the campaign’s narrative. The reduced number of encounters also speeds up character progression which makes it easier to fit a 1st-30th campaign in a more reasonable timeframe.

In my campaign, I’ve opted to find ways to give out more experience instead. I’ve been running far more skill challenges which move much faster than combat and being more generous with quest awards. The last level of play in my campaign actually featured 5 skill challenges of varying complexities and a couple quest rewards in addition to those 3 fights. That was enough to boost the xp totals of the characters and allow them to level up using the normal progression chart.

In a movie or book, only a handful of fights against villains and their major henchmen tend to be major scenes, but the guidelines in D&D push towards each fight being similar in scope whether it is a skirmish with the guards at the front door or the climactic duel against the evil wizard. I’m starting to change that by really questioning whether a given fight is important to the plot or not. If I want the fight to be a big scene, it’ll be built normally, but if the fight is something less important, such as dealing with a guard while infiltrating a fortress, I’m doing encounters with only minions. That lets me emulate stories where minor opponents, like orcs or stormtroopers, go down in one hit and also allows the plot-important combats, such as a cave troll, to stand out more.

The D&D mechanics assume that there will be a handful of combat encounters in each day. When a player expects to fight through several challenging encounters per day, they need to put more thought into whether or not to use resources like daily powers and action points.  If a party only has a single encounter each day, then they can burn through all of those daily resources in a single fight giving them much more firepower.  In order to keep encounters challenging, you’ll need to scale up fights to be more difficult than the guidelines recommend. For my group of 4 players, I’ve gotten into the habit of designing encounters balanced for 5 characters which seems to make the fights challenging enough to make up for the reduced number each day.  You should be careful about increasing the difficulty by using higher level opponents because daily powers generally don’t come with enough increased accuracy to make up for higher monster defenses.  Instead, I find that adding more monsters close to the characters’ level to the fight works better.

Combining these ideas, I plan on running fewer combat encounters per character level but mixing in more skill challenges and fast combats against small numbers of minions. Based on recent sessions of my campaign, I think this pacing has done a better job capturing a cinematic feeling to make important fights more memorable.

Sounds good. Consider also mixing SCs in with “smaller”/”easier” fights, but making combat victory mean a little less than SC success. That /should/ enable a weaker force to use up more party resources, if the party must devote actions to the SC.

Good idea. I’ve generally been looking at the minion fights as an obstacle encountered during a larger skill challenge task like sneaking into an enemy fortress, but I like the idea of having one incorporated into the mini-fight itself.

Makes you wonder what “experience points” means doesn’t it? For instance, how much actual experience does someone gain by beating down monsters over and over? Martial prowess, casting skill, etc perhaps, but real (fantasy) life experience? Not much.

For as long as I’ve been playing D&D the books have included experience for things other than killing monsters, but it’s experience at being an adventurer – delving deep underground, disarming diabolical traps, and killing monsters to steal their stuff. An adventurer would make a lousy farmer, but they get better and better at what they do.

Thinking about it, 3E probably gave the least emphasis on non-combat rewards out of any edition that I’ve played. 2E (the first edition I played) included guidelines on how much xp to give out for things like good roleplaying, spell research, etc, and I think all of the pre-3E editions included xp for treasure found.

[…] how the rules interact with that play style. As a result, I’ve been modifying some rules (see here for an example) and also thinking about switching to running and playing shorter adventures and […]

[…] just individual combats. I’ve already touched on campaign planning a bit with the posts on pacing and villains, but for this post I wanted to give a few more tips for planning a cinematic […]