@Matt_Sheridan @glimmthegnome is making some new origins: two-headed, survivor, etc. Check it out. Maybe he (or you) will make Dinosaur.

I’ve been thinking about a dinosaur origin for Gamma World since seeing that tweet.  Dinosaur as a concept is pretty broad, so I decided to focus on abilities to represent a Tyrannosaurus Rex.  I could see origins for some other iconic dinosaurs like Triceratops or Stegosaurus, but I felt that T-Rex was the most interesting option.

After a quick brainstorming session, I had a short list of iconic Tyrannosaur traits:  big bite, tail, cold-blooded, carnivore, short arms.  I knew I wanted the novice attack to be a bite, but I wasn’t originally sure about the other powers.  I also decided that cold-blooded cold make a good negative trait, but I didn’t want it to be a standard weakness to cold.  I thought that a tail attack could potentially play into the expert attack, but I struggled to come up with anything that seemed right.  Working the carnivore theme into the bite attack proved pretty easy, and it also ended up inspiring the utility power.  The short arms theme was another tough one because I didn’t want an additional negative trait on top of cold-blooded.  After a couple drafts, I’ve ended up with an origin that I think pretty well captures the core themes I was going for, even if I ended up relegating short arms and a tail to the flavor text.

While working on the origin, I knew that it would be a good stand-in for an alligator, but once I had finished, I also realized that it could pretty easily be re-skinned as a sharkoid.  The only changes that seemed necessary were in the traits, in order to replace the cold-blooded and defense bonuses with a swim speed and gills.  I also switched the associated skill from Nature to Athletics because it seemed like a better fit for a sharkoid.

Or, if you prefer, you can download the Sharkoid version here:  https://glimmthegnome.files.wordpress.com/2010/11/sharkoid.pdf 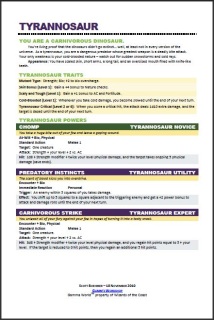 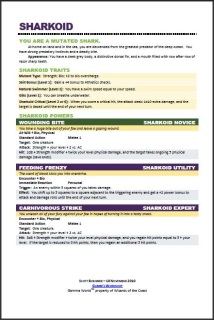 UPDATE: I’ve compiled all of my Gamma World material into a single pdf. You can download the latest version here.

This is brilliant because I was already working up my crew for a “Project G.eeK.eR.” campaign of Gamma World and the only character from the main cast you couldn’t create was the Gun-Toting T-Rex Mechanic. Fun stuff & thanks!

I was hoping we’d see a Dinosaur origin in Famine in Far-Go, but I will be very surprised if it is not in the Legion of Gold expansion. I really like what you’ve put together here, and perhaps most I appreciate how well it matches the published Gamma World material, but I’m much more interested in a generic Dinosaur origin than a specific T-Rex one so that it can cover a wider range of character options with simpler rules (which seems to be the trend with GW origins so far).

@Bartoneus – Dinosaur as a single origin seems pretty tricky to pull off effectively just because there is such a wide range in concepts. The iconic aspects of the various species are very different from one another (bite for Tyrannosaurs, horns for Triceratops, tail spikes for Stegosaurus, bulk for Apatosaurus, etc), so my fear was that without focusing on a subset of species it would either be too bland or too scattered.

I’m not so sure, I think with things like the Android origin they managed to cover a wide range of concepts with the one origin (even things like Cyborg or non-humanoid robot if you really want). That said, it does look like with some of the new origins in Famine in Far-Go that they are doing some that are a bit more specific, I still would just love to have the Dinosaur origin be able to be either a triceratops, t-rex, stegosaurus, or any of those. I guess the key to remember is that it’s going to be a roughly humanoid version no matter what, so most likely you could give them all a universal Tail Swipe or something along those lines which would work for nearly any Dinosaur for the origin.

My thought is that with Gamma World the fear of being “too bland” is not as much of a concern, look at the way they handled weapons – generic 2-handed melee weapon. If you happen to be a dinosaur and want to be a triceratops, maybe your melee weapons are your horns! I think a single Dinosaur origin could work very well, and I’d love to see you take a shot at it! 🙂

@Bartoneus That’s a good point about Gamma World’s expectation that the players will use their creativity to fill in some flavor. I’ll think about what a less specific dinosaur origin would look like, but it will have to wait until after I finish up a couple more of the non-mutant origins I’ve been working on (likely either Gearhead or Medic will go up next).

[…] than getting sidetracked by a dinosaur origin, I’ve been working on more non-mutant origins for post-apocalypse archetypes.  In particular, […]